THE SHAPE OF DESTINY 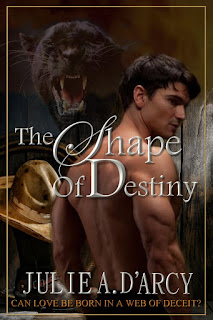 Currently out of print
Posted by Julie A. D'Arcy at 19:14 No comments:

HOW TO CREATE A BOX SET COVER

Boxed sets are great ways to market and resell content. Someone who might not buy just one book on a topic might leap for the opportunity to get a boxed set of everything they need on that topic. It feels like a bargain. For series of novels, it's a great way to ensure you have everything in order and in one place. I have twelve medieval novels and I offer boxed sets by theme. That way someone who only wants the books that involve chaste heroines, or wants to read about the heroines who have prevailed over harsh challenges, can read those stories without having to hunt them down manually. Here's step by step instructions on how I created one of these. First, the final product. We are trying to create an image which accurately reflects to the user what they're going to get. In this case, it is four full length novels. 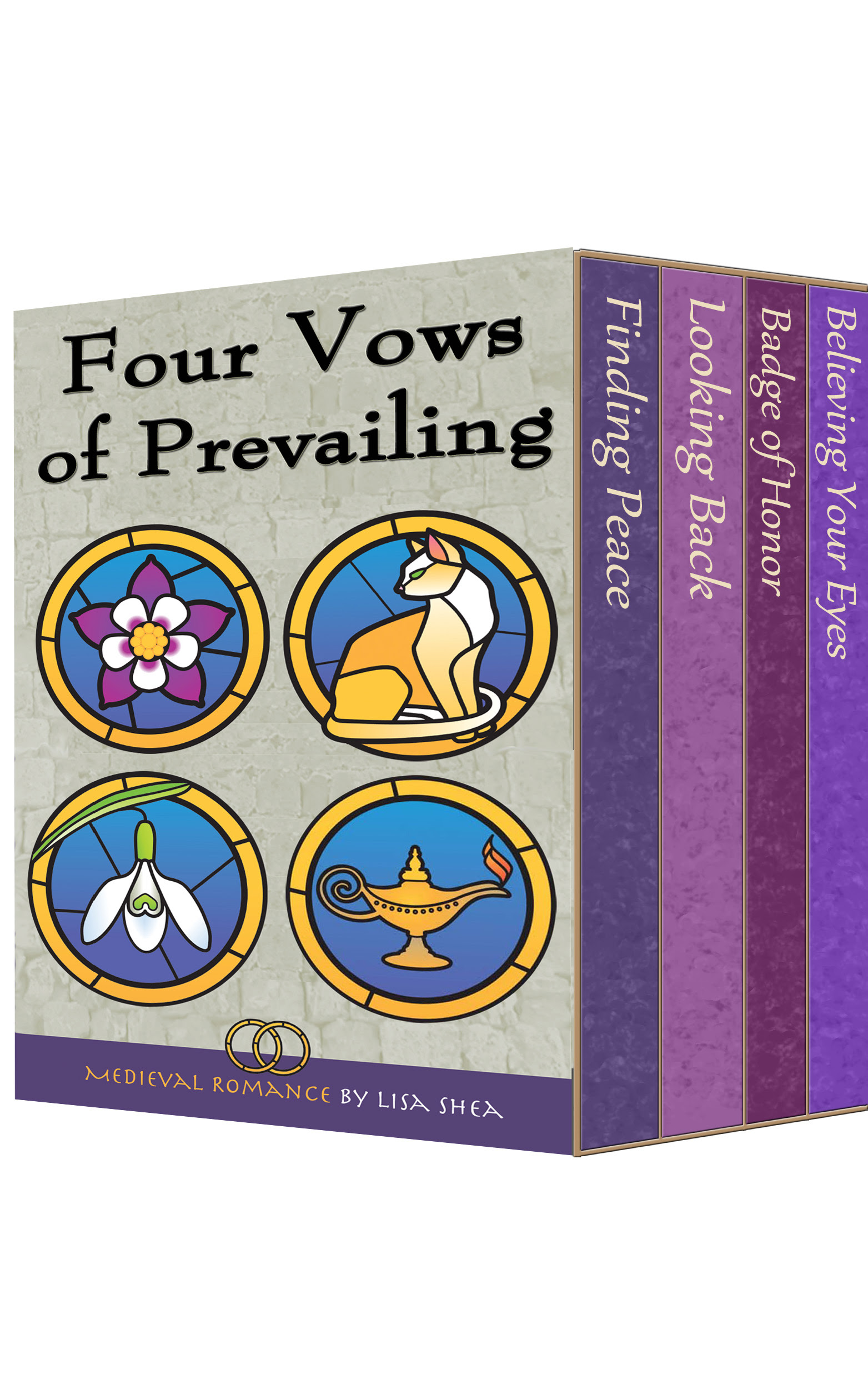 So, step 1. The top cover has to show that there are four books. In my medieval novels I have an emblem on each individual cover, like this:

I put each emblem on the box set cover to show these were the stories included in this set. If your book covers have integrated text and images, you might want your overall box set cover to have small versions of each full cover. You want your original cover to be 1563 x 2500 - the Kindle proportions. Create a cover which has the box set title and features all four (or however many) sub-books in it. 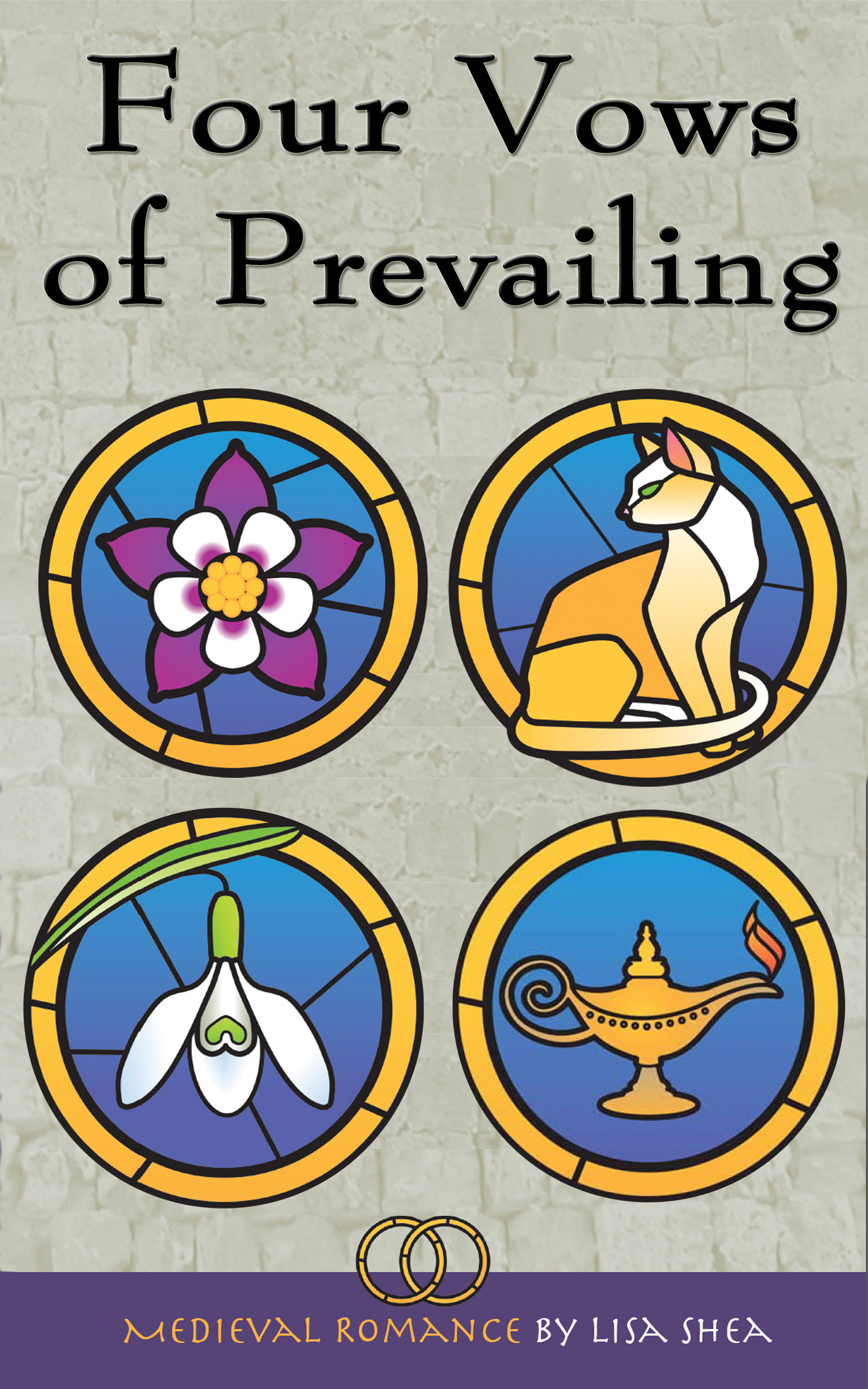 OK, great! Step 1 is done. Remember, this is going to be seen at tiny thumbnail size when people are buying it, so those images have to be clear. That's part of why I love my emblems. They stay clear even as they shrink. On to the box set creation. Make a brand new, blank image which is also 1563 x 2500. That's a good Kindle size. Make a version of your cover which is only 1635 pixels high. Cut and paste that into your blank document. Put it against the left side, leaving a few pixels of margin. Center it top to bottom. It doesn't have to be exact. Select the bottom left corner of your graphic. Now click the "SKEW" button in the bottom area of PhotoShop. This lets you use that anchor point to skew your image. Drag the bottom left corner up. Then drop the top left corner down. Create whatever feel of perspective you think works best for your book. 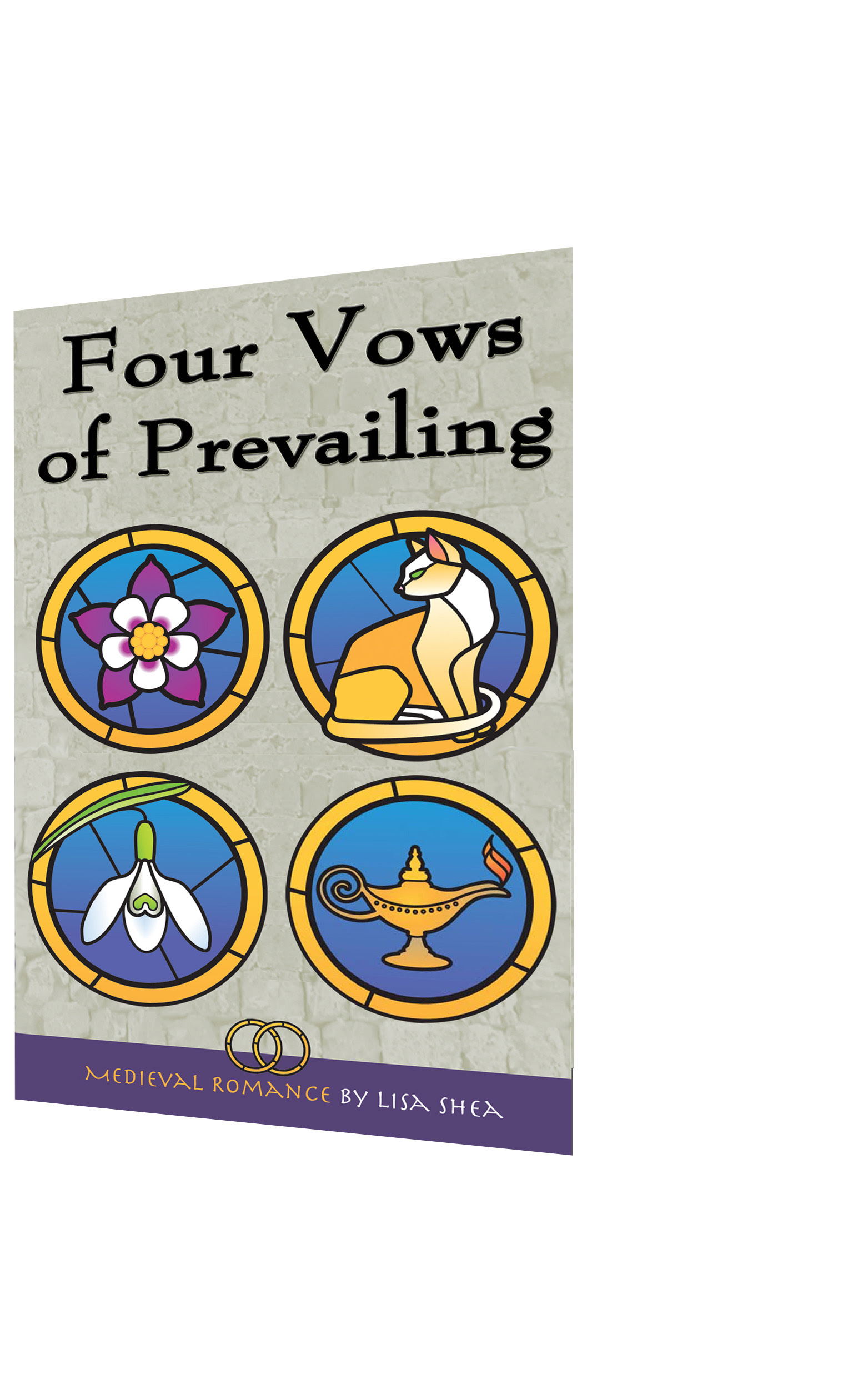 Great! Now to add in the spines of the book. On the right side, make a black rectangle which is 1635 pixels high and fits from a few pixels right of your cover to a few pixels away from the right edge. Just as before, click the far corner of it, use skew, and skew the right top and right bottom to create the slant on that end. 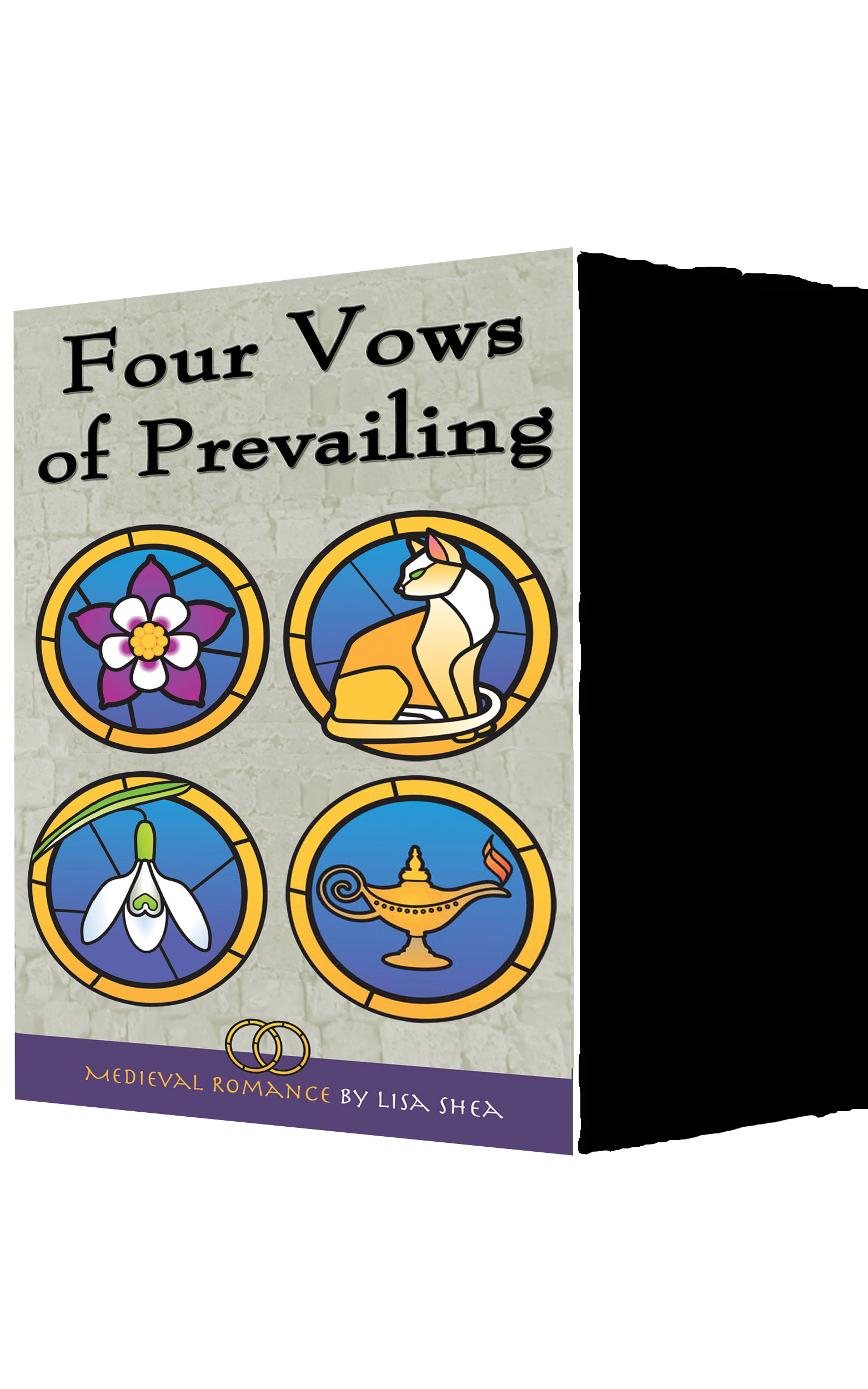 So far so good! Now you want to add in colored bars to show the different spines. Use colors to match your color theme. These are just rectangles with, again, a bit of skewing. 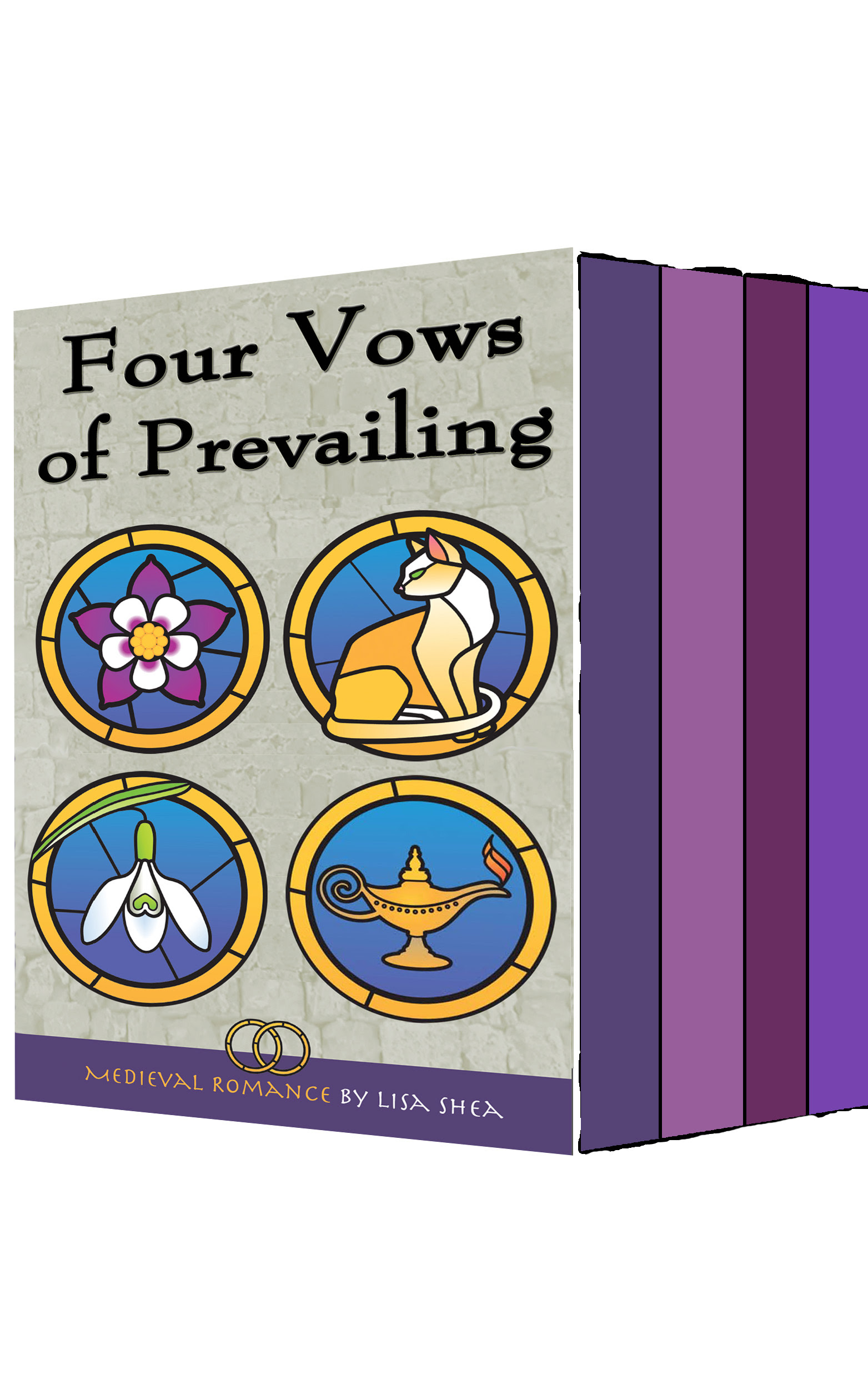 Now for the titles! These are just normal text. Use whatever font you want. The ones further back should be a little smaller than the front ones, but try to ensure they can all be read. Fancy fonts don't work well at small sizes. Keep it simple and legible. 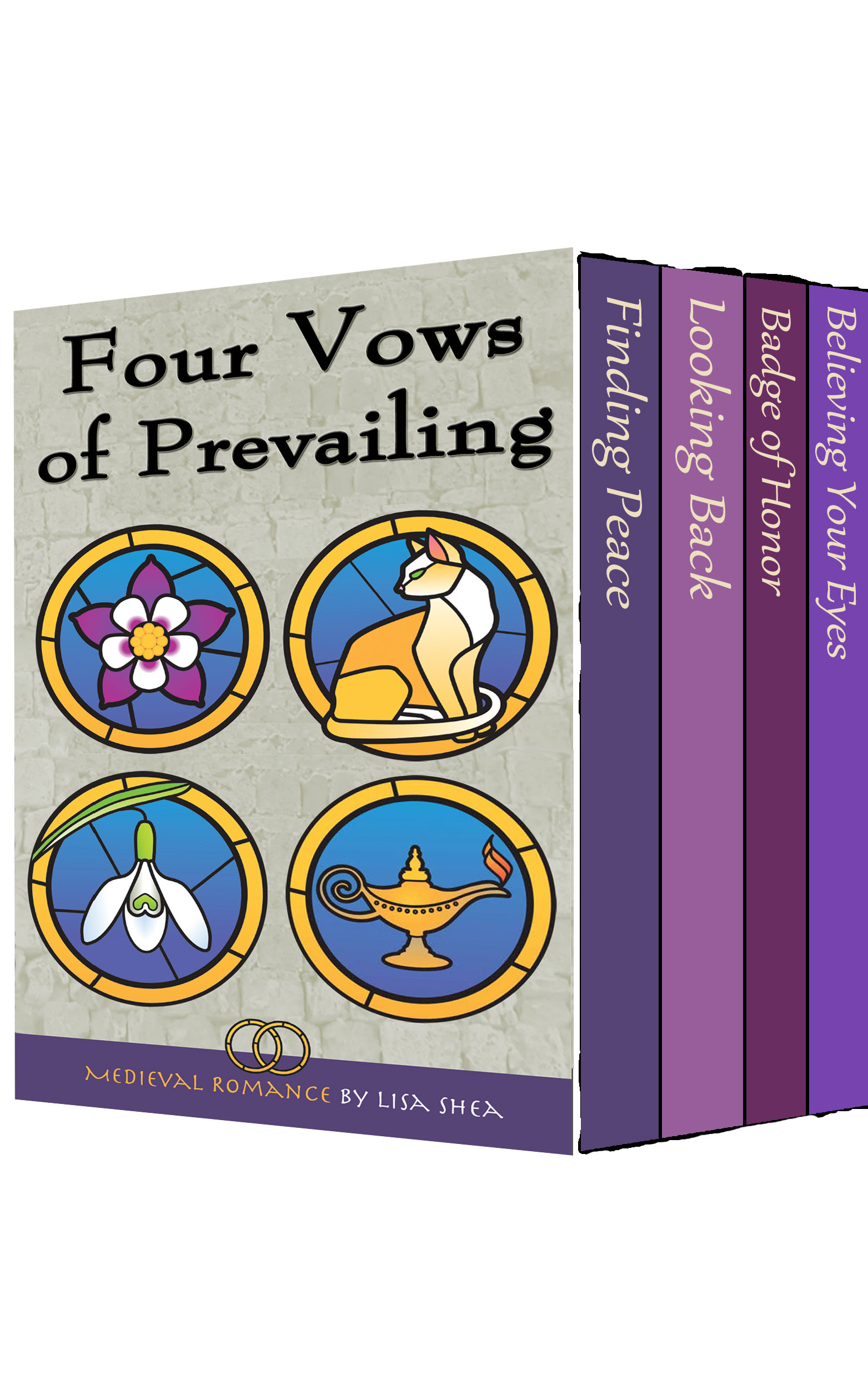 You're nearly there! Select the area of black showing through around all four rectangles, make a new layer with it, color it tan (or whatever color you want your empty area to be) and bevel it. That creates the slight rise around your four book spines. Voila! You're done!

Let me know if you have any questions! It should take about five minutes to do this once you get the hang of it. Lisa Shea Free EbooksLisa Shea Full Library of Published BooksGetting Your Book PublishedWriting Tips and Online Books Lisa Shea Medieval Romance NovelsOnline Literary Magazines Lisa Shea's Homepage 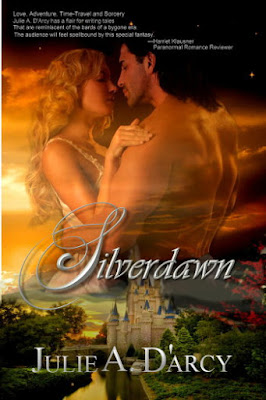 Silverdawn, daughter of Mikkasah, born to the magick. Mikkasah, King of Rastehm is forced to send his only child into the unknown future of the 20th century Australia, where she grows to maturity and moves to London with her adopted parents. She has no knowledge of her origins nor that she holds the key to the safety or destruction of both her new world and her old, until one night, she is stalked by a lion and a griffin, and cast into an adventure that will change her life. A dark knight becomes her saviour. Faren Malaan, Knight of Paladia, is sent forward in time to track and retrieve the Crystal Pyramid. The king’s astronomers have learned that the pyramid, which shifts through the portals of time, is cracked. And, if not restored, the sorcerer, Isanti's demons will escape. Through sheer luck, Istani was not imprisoned by the Goddess, when she created the Pyramid to banish him and his demons. Istani travels through time, taking over the bodies of innocents, then casting them aside. But this time he is trapped in the sickly weak body of Peter Waymer. His only escape from the cancer eating away at him is to find the Pyramid, release his demons and have them in turn heal him. With one thought in mind after his escape, to wreak destruction upon mankind Celtic Mythology, Dark Urban Fantasy, Time Travel, Lust and Romance! The fate of two worlds rests in the hands of a banished Princess of Rastehm and a Knight of Paladia who is battling his own personal demons. They must join forces with three friends they meet along their way to restore the Crystal Pyramid to Deharna, and battle the tormented mind of Iraj who will stop at nothing to gain his prize.

...She watched him, silent, bemused, her breath coming in short, sharp gasps. Aching for him to come to her, aching for him to fill her as no man ever had.
He rose and, in the muted light of the bed lamp and the dying embers of the fire, she watched his hands go to the fastening of his jeans. He flicked open the top button and their eyes met. He paused, running his gaze over her body then cursed loudly and swung toward the window, threading a hand through his hair. “I am sorry. I cannot do this.” His voice came like the crack of a whip in the silence.
Elanessë turned onto her side, her face flushed. She reached for his raw silk shirt and pressed the dark cloth against her breasts. “Was it something I did?”
He turned. Her skin was so fair, so beautiful, against the ebony of his shirt. The sight of her distressed face made his heart weep—a fair rose he had almost defiled.
She turned from his gaze, unable to meet the blueness of his eyes now circumstances had changed. “I was too forward? Is it because I allowed you to do that? I know I am probably different from the women you have known…” She left the sentence hanging.
Faren hurried to kneel before her, framing her face in his hands. He pushed her damp tousled hair back from her cheeks. “Never think that. You are perfect. It is I. I feel nothing but loathing for my own weakness. I made a promise to myself, which I have now broken. I should never have let this go so far. I am but a Knight in your father’s court. You are the Princess of Rastehm, perhaps one day to be queen. Your father means too much to me for me to besmirch his daughter.”
“And I mean too little to you to love,” she said, tears glistening in her eyes.
He wiped the tears away with his thumb then released her and rose to move to the window. He stared into the night. Funny how the brilliance of the stars reflected none of the pain that he felt.
The sharp claw of desire clutched at his gut. He was so hard with the wanting of this woman, he thought he would burst. Yet he could not bring himself to take her. As much as his mind and body screamed to do so, his head told him it would go against all his teachings as a Knight of Paladia. “I know little of love, Elanessë. I have never had time for matters of the heart. I am but a rough soldier. I do not know if I understand what love is.”
Elanessë donned his shirt, which came just below her thighs, and rose to follow him. Her arms snaked about his waist; she pressed her cheek to the hard warmth of his skin. “Then, Sir Knight, I shall teach you.” She felt a tremor run through his body as her breasts pressed against his back.
He stepped away, deliberately putting distance between them, and turned to face her. “Perhaps, but you are still who you are, and I am who I am.”
Elanessë felt her heart clench. What could she say to stop his words of rejection? Stop him from walking out of this room and never touching her again. Even the thought was too painful to contemplate. “And never the twain shall meet?” she asked softly, almost flippantly, while the knife pain in her breast twisted a little more. “What of Guinevere and Lancelot?”
“And to what end did they come?” he countered dryly. “He a monk and she a nun.”
“You don’t know that for certain.”
Faren raised a dark brow. “If I could change the proof I would, but to refute the truth is akin to holding back the waning of the moon.” He gave a bow and reached for her hand, bringing it to his lips.
The gesture seemed to Silverdawn only to distance them more, slotting her neatly into her place—princess to his knight, far beyond his reach.
“You are a stubborn man, Faren Malaan.”
“Goodnight, princess.” He rounded to stride to the door.
Elanessë found her voice as he reached for the handle. “One question.”
He stilled but did not turn.
“Does the dragon tattoo bear any significance?”
Faren glanced down at the red dragon that scaled his arm from elbow to shoulder then turned, his gaze locking on Silverdawn. “All Knights of Paladia receive the dragon on the day of our investiture. It is our insignia.” He pulled the door wide.
“And are damsels not sacrificed to temper the dragons?”
“Not this time, my lady, not this time,” he said, not turning as he pulled the door closed behind him.